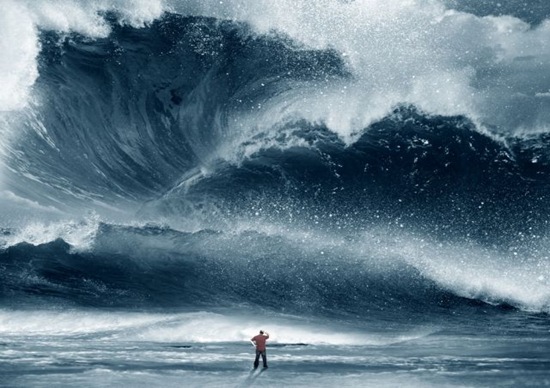 Floods are among the most destructive of natural disasters, as communities across the Mississippi basin know all too well. But most modern-day floods are mere drops in the bucket compared to the epic torrents of the past.

Some historical mega-floods have such immense water volume that worldwide sea levels have risen. Some have reshaped the face of the Earth, altering whole landscapes and carving tremendous canyons. Others have washed whole cities into the sea.

From Noah's Ark to the tale of Atlantis, flood myths are prevalent in cultures around the world. These stories are an ominous reminder of just how powerful nature can be. Here's our list of the biggest floods in human history. (Text: Bryan Nelson) 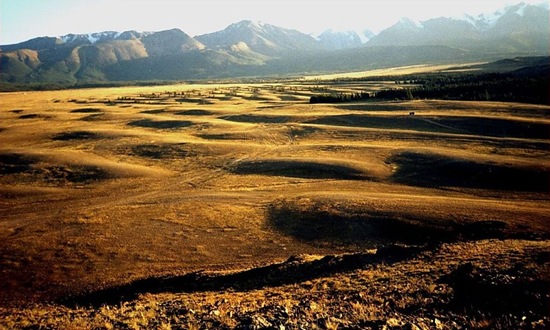 Photo: Рудой А.Н./Wikimedia Commons
The largest floods known to have occurred in human history are those from the end of the last ice age, between 13,000 and 8,000 years ago. As the world's great glaciers began to melt, they left large freshwater lakes behind that had been precariously confined by retreating ice dams. When those ice dams failed, the floods that resulted were almost beyond comprehension.

The largest of these floods are estimated to have had peak discharges of nearly 20 million cubic meters per second. The Altai Flood, largest of them all, swept through what is today central Russia. Giant current ripples, like the patterns found in river sand but large enough to form hillsides, still undulate over the Kuray Basin (pictured above), evidence of an unfathomable flood.

North America was also home to floods of comparable size. A series of cataclysmic floods, called the Missoula Floods, regularly swept through what is today the Columbia River Gorge. Meanwhile, floods that resulted from the draining of the ancient Lake Agassiz - a lake so massive that it held more water than contained by all lakes in the world today, combined - are estimated to have risen sea levels worldwide by as much as 9 feet.

Related Link: Next ice age not likely before 1,500 years 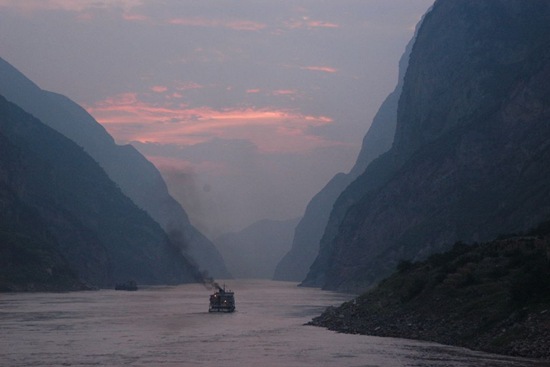 Photo: Andrew Hitchcock/Wikimedia Commons
The deadliest flood in human history occurred in China in 1931 when the Yangtze River overflowed its banks. An estimated 51 million people were affected, 3.7 million of whom died.

The rivers of China are among the most susceptible to flooding in the world, with as much as two thirds of the country's land area prone to flood disasters. Because so many people live along the Yangtze, massive floods along this river are particularly devastating. Several other flood events, such as those that occurred in 1911 and 1935, also carried death tolls in excess of 100,000.

Related Link: From Tao to Mao to now: A 'middle way' for the Yangtze? 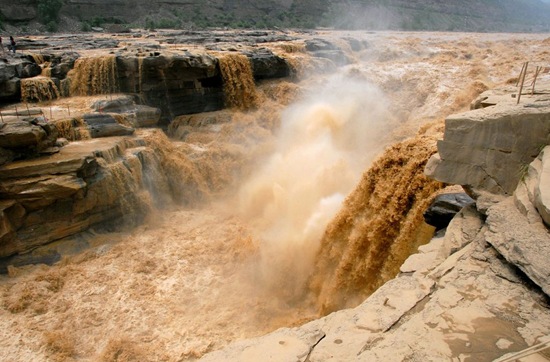 Photo: Leruswing/Wikimedia Commons
The second and third deadliest floods in human history occurred along China's Yellow River (Huang He), in 1887 and 1938 respectively. Loss of life for the 1887 flood was estimated at around 900,000. The flood happened after heavy rainfall put overwhelming stress on the dikes built to contain the river's flow.

The Yellow River flood of 1938 had a far more sinister and tragic cause: it was purposeful. In an attempt to halt invading Japanese forces, the Nationalist Government in central China opened the dikes along the river. The ensuing flood destroyed thousands of small villages and drowned an estimated 800,000 people. It has been called the "largest act of environmental warfare in history." 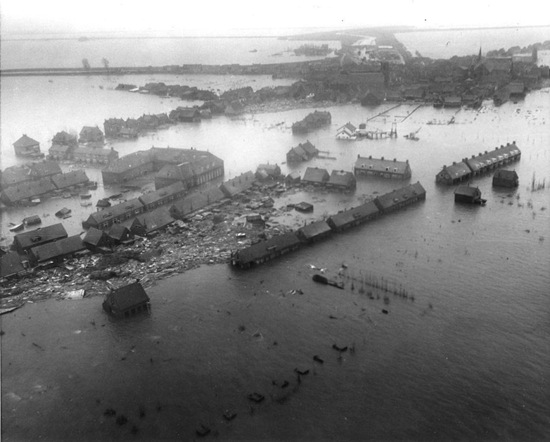 Photo: Agency for International Development/Wikimedia Commons
The Netherlands is another country highly susceptible to flooding, mostly because 50 percent of its land area is located less than a meter below sea level. ("The Netherlands," translated from the Dutch "Nederland," literally means "Low Country.")

Elaborate drainage systems using dikes, canals and pumping stations have been built to keep the sea at bay, but storm surges throughout history have overwhelmed these systems and caused immense damage. Whole cities and regions have been reclaimed by the sea.

The deadliest storm surge in recorded history occurred in 1530. Called St. Felix's flood, this surge claimed as many as 100,000 lives. St. Lucia's flood of 1287, St. Marcellus flood of 1219 and the North Sea Flood of 1953 were also notable deluges, but the region has been absolutely littered with deadly floods throughout its history. 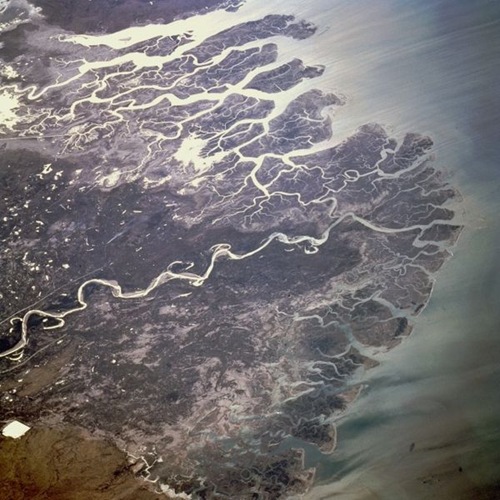 Photo: NASA/Wikimedia Commons
The largest flood in modern recorded history, in terms of discharge, occurred in 1841 on the Indus River. It was caused by a landslide that had blocked the river, resulting in a natural dam. The water behind the dam mounted until the dam failed, causing a torrent which rushed through at an estimated 540,000 cubic meters per second.

Anything downstream of this deluge would have been completely washed away. In fact, a Sikh army, fighting in the Sino-Sikh War, was reportedly drowned by these waters as far as 300 miles downstream from the original breach. 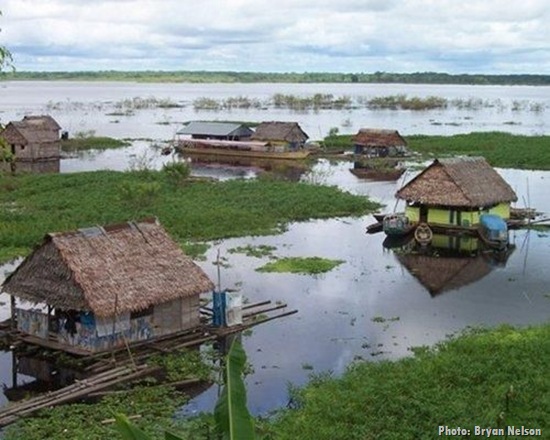 The Amazon River basin, by far the largest river basin in the world, is responsible for 20 percent of the world's discharge of freshwater into the oceans. Seasonal floods cover an area as large as 140,000 square miles every year. If these floods weren't considered a natural seasonal pattern - that is, if the banks of the river in the dry season were highly developed - they would be responsible for incredible devastation. This is one major reason that massive deforestation, damming and development in the Amazon could be so dangerous: the Amazon River and its many tributaries are virtually uncontainable.

The largest recorded flood along the Amazon occurred in 1953. It was the largest meteorological flood (that is, caused by rainfall) in recorded history, with a peak discharge of 370,000 square meters per second.

Related Link: 9 of the world's most majestic rivers in peril 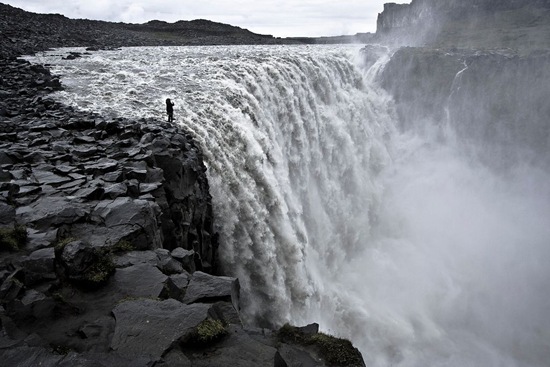 Photo: batintherain/Flickr
Wherever glaciers and volcanoes meet, massive floods can ensue. There is perhaps no better example of this than in Iceland. In fact, the largest flood of this kind in recorded history occurred after the Katla volcano erupted in 1918. A deluge, formed from melting sub-glacial ice, roared across the landscape with a discharge of around 300,000 cubic meters per second.

Astoundingly, this flood was merely a baby compared to others that have occurred in Iceland in the past. A flood down Jökulsá á Fjöllum, also caused by volcanism, is thought to have occurred about 7,000 years ago with a discharge of up to 1 million cubic meters per second. 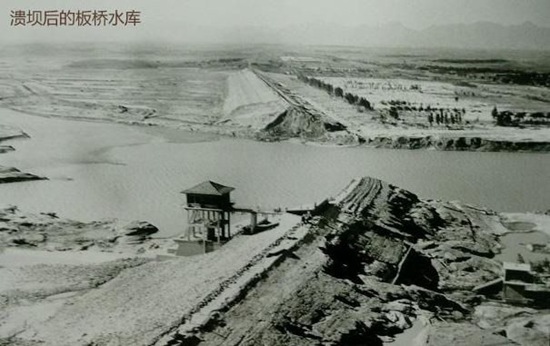 Photo: Wikimedia Commons
The deadliest flood in history caused by dam failure occurred in 1975 when China's Banqiao Dam burst. Though it was built to contain the River Ru even during rainfall as heavy as 300mm a day, rain in the wake of Super Typoon Nina surpassed that threshold. As many as 171,000 people perished in the flood.

By comparison, the deadliest flood in United States history due to dam failure, the Johnstown Flood of 1889, killed 2,200 people.

Related Link: 7 lakes and rivers that are drying up 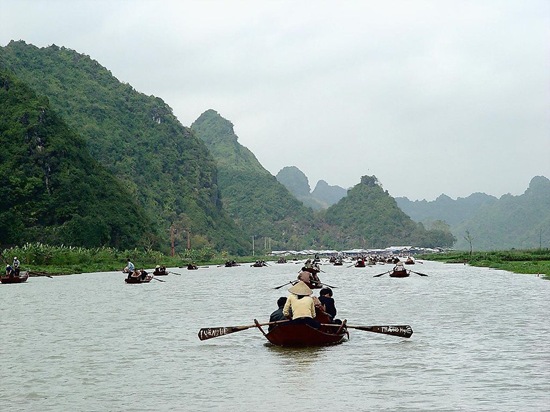 Photo: Hoàng Việt/Wikimedia Commons
Deemed one of the "most serious weather events of the century" (in fact, it was one of the deadliest weather events in human history), the Red River Delta flood of 1971, may have claimed as many as 100,000 lives. The exact number of lost lives could have been much higher, however. It's difficult to know for sure because the event happened in the middle of the Vietnam War, so details about the flood are limited.

The area of flooding in and around Hanoi is highly populated, so there is little doubt that the destruction was immense. The fact that the event happened during wartime only heightened the disaster.

Related Links: (1) Hurricane Irene's flooding and destruction; (2) Tips to help protect your family and home from a wildfire [Sponsored link]